I recently completed NAMI St. Croix’s Family to Family course.  It’s a course I attended so I could gain more insight into my mother’s illness.  I have really been looking for that place where I can have a support system of both people and information, and the St. Croix chapter of NAMI has been that for me.  That and having someone to talk to who can listen to me, guide me and hold me accountable for the things I should be working on to make me, a better me.  I have that in my family, close friends, and my therapist.

During a recent Family to Family class, we did an empathy exercise.  Half of the students in the class sat side by side at a table with paper and pen, assigned to draw.  The other half of the students were placed strategically behind each sitting student, and those students standing, were assigned to read out loud.  I was one of the artists.  You could only draw what you were told to by one of the instructors who was calling commands out loud.  Once the instruction was given to begin, everyone had to do their assignment until time was called.

I paid very close attention to the instructor who was giving instructions on drawing shapes, and was only successful in the first thing I was asked to draw.  The student reading behind me repeated a mantra telling me to get out, that people were after me, I wasn’t safe and I needed to run away…those chants, and the chants of the other students made it impossible for me to concentrate on the careful instructions being given by the instructor.  It was then that I realized what my mother must go through daily, as these thoughts of danger constantly swirl in her head, blocking out anything reasonable I may have to say.  In that moment, it clicked. Empathy is powerful.

So this past Sunday, October 14, 2018, I journeyed to Buck Island for only the second time in my life in just two months…prior to my August 2018 trip, I had never been to this jewel of the Caribbean in the 10 years I had lived on St. Croix.

The official name of this pristine national park treasure is the Buck Island Reef National Monument.  It consists of more than 19,000 acres of protected land and sea, and it’s largely known for its beautiful coral reefs.

I made both trips as part of an activity with Project Promise, an organization helping at-risk youth in St. Croix, that I volunteer with.  Both days were incredibly beautiful!  During the first visit with our Project Promise students and their families, we hung out on Turtle Beach where we relaxed on the sand and played in the water.  Good times!

The day was warm and clear, and we started off in anticipation of our day at the beach.  At least, I did.  I thought the boat would take us to Buck Island, and we would frolic on the beach just like the last time I visited.  I did not realize that it was a snorkeling tour we signed up for.  I should have guessed when members of the crew began distributing snorkel gear as soon as we got on the boat.

We arrived at our destination, and our captain advised us that we were at what was known as Turtle Beach because of the vast numbers of turtles that go there to lay hundreds of eggs.  We got a brief history lesson about the island, and when it became a protected reef.  Then it was time to get into the water, head to the sand and get a quick snorkel lesson.  Captain said we would be there for about 45 minutes.  In my mind, I was thinking, well this is a short trip!  Little did I know that this was only the precursor to the main event!

I practiced as best I could, and the instructor worked with me for a while to make sure I felt comfortable.  Well, I never did.  Let me say here now that I am a very weak swimmer, only learning to swim in recent years as an adult.  I could actually be a pretty good swimmer if I got my breathing technique right and learned to tread water.  I am also an asthmatic, so that whole mask closing off your nose thing, didn’t sit right with me!  Then it was time to go back to the boat, where we sailed around to the western part of the island, so they could drop us in open water to do a snorkel trail.  What??? So my kind instructor had informed me that even if I didn’t get the breathing thing down pat, they could still pull me around on a tow ring. 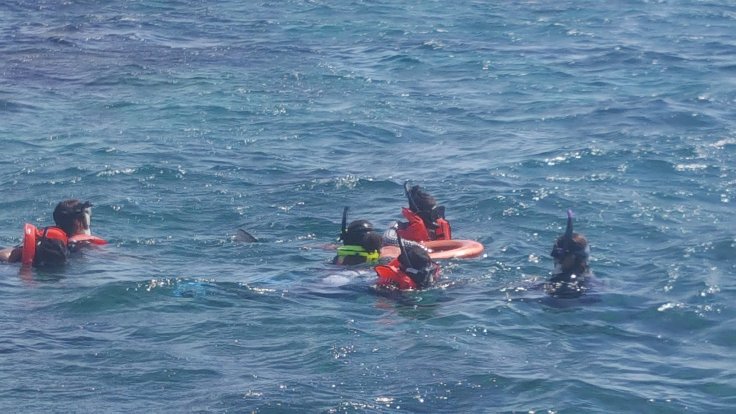 They had us go out in teams, and my team was already way out in the open sea.  When I got into the water, the waves were very choppy and water kept splashing my face and in some instances going over my head.  I quickly swam to my group and the safety of the tow ring, and held on for dear life.  My eight year old was hanging out nearby, and with panic in my voice, I urged, begged, yelled at her to hold on to the tow ring.  I was scared for her because her mask kept riding up!  I took a few quick peaks in the water with my mask while we were waiting, and it was beautiful coral beneath me and very deep! When our tour guide said she would be leading us on a 5-7 minute tour, that’s when I gave up and threw in the towel.  I was uncomfortable with my mask, and the waters were rough and I didn’t think I could even last two minutes on the tour, although we had been out there waiting longer than that.  I asked to go back to the boat, and she swam along beside me to make sure I got close enough to board.  I also asked my daughter to come with me but she pleaded to stay and other adults including the guide, promised to keep an eye on her.  I watched helplessly from the boat as they started off, praying for my child all the while. 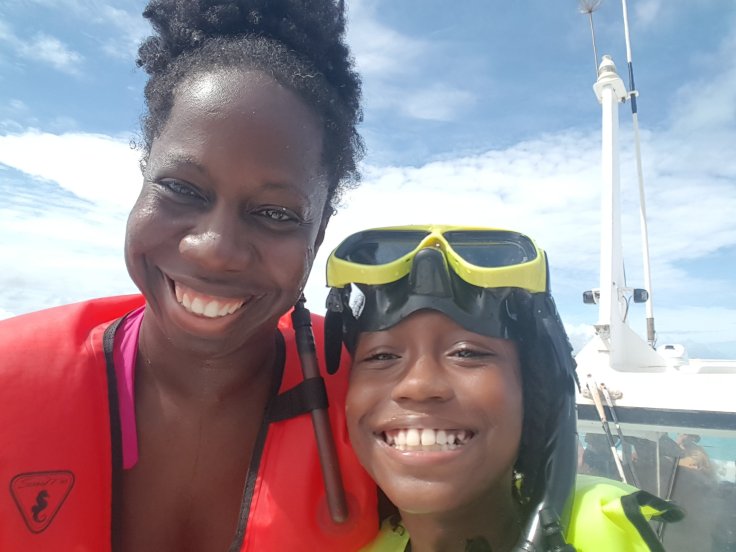 Suffice it to say, she returned excited about the blue fish and coral she had seen and a tale of almost getting onto a coral that stood about three inches out of the water.  So, I was sad that I didn’t go along on the guided tour, but still happy I went with my gut feeling to stay on the boat.  And as the saying goes, “there’s always next time!”